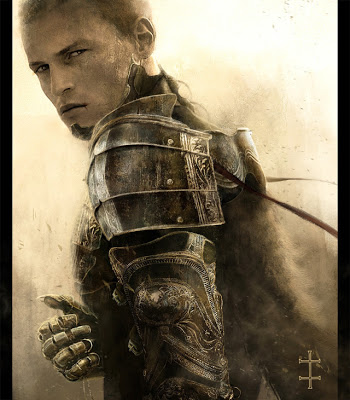 I know I have not posted for ages and ages. I mostly hang on my other blog talking about books. And I have missed my flash fiction entries so here is one :)

Starting from the beginning

War was dirty, but then life was dirty. Ananna knew it in body and soul. She was just a orphan who had taken the only road open to her. A camp follower. There were always brothels and wars. She picked wars, because it was a brutal life and she had nothing to lose in the end. Her dreams were all long gone, left in a ditch somewhere in Karydon. This was the life she lived, a dirty, hopeless life where she hoped one raid into the camp would kill her.

That all changed the day she saw him walking by. Blood all over him after the day’s fighting. He looked at her, not past her and she felt something stir deep down in her soul. All before a soldier dragged her away after throwing a copper at her. After that day she made it her business to know who he was and where he went. A mighty prince, a prince made for battle and bloodshed. Those hopes slowly came to life again. What if he saw her, wanted her? She could get a better life if she caught him. A life where she did not crawl on all fours begging for scraps.

Then came the night. She was cleaned up for once, in a stolen dress, looking almost young and fresh. He saw her and beckoned her to come. This was her chance. She did not look the part of a camp follower today, she was something else, something he could have. A prince would not want dirt, but he might want her. And so he did.

That day she did not go back to the rest of the whores. She just wandered around, trying not to be in the way. She knew she could make him want her again. But that evening the drums were silent and the men quiet. They carried him in and she knew that the prince of war was gone. He would not call on her again. In that moment what was left of her died. The small shred of hope was gone. She had dared to dream and she had fallen to the ground. No more.