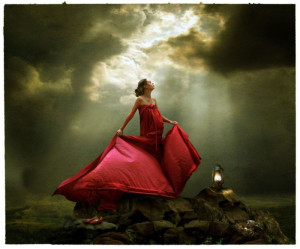 A new day
She woke up and heard the wind gathering strength outside. She could hear thundering hooves in the clouds above and she sighed. She looked to her left were her husband lay and she felt sick to her stomach. She hated him, she hated everything he died, said and wanted. And nights like this when she heard the thunder she felt a deep longing inside of her. The longing to be free of it all, to be happy. To be something else than she was now. And she knew that if she did not do it now, then she never would. Soon enough children would hinder her. Could she give that up?

Slowly she turned over and stood up. She took the sheet from the bed and wrapped it around her. She tip toed to the door and opened it. She cringed as it made a sound, but he did not stir. So she left, no servants were out in the corridors and she knew of an easy way out. With a lantern she made it outside where the rain whipped her in the face, and she ran. She ran as if the Dark One himself were out after her. She knew someone would have seen the lantern or even her. But dared not to speak up, they all loved her, they all hated him. But someone would speak anyway, but before that she would have reached her destination. The cliff at the back of the keep. There the winds were strong, but soon the calmed, the rain died out, and the thunder stopped. The clouds opened and let light through.

She looked to the sky and called his name.
“I am ready, I am yours!” She screamed and he appeared from the clouds. Gently he touched her chin and smiled.
“I love you Annalis, but you know the price.”
She closed her eyes as fear took hold, but she cared not. She loved him, she loved the God of Thunder. But she also knew she could not enter his realm like this. She would have to die and before that had scared her more than loving him. But now, after this. She opened her eyes and smiled.
“I love you”, she said and jumped.
Tags: flash fiction
Subscribe